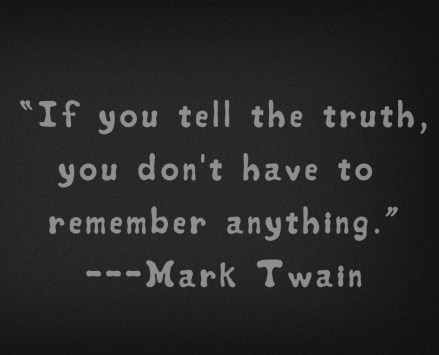 I was “truth-challenged” as a kid. My “make-believe muscles” were super-keen. It was fun to take a story and stretch it as far as I could. But, I found out eventually that I didn’t want the results of that kind of living.

I’ll never forget my first major wake-up call. I was in the sixth grade. During recess, several of the boys and I had a healthy game of football going when all of a sudden one of the new “tough girls” decided she wanted to play.

Things went fine until some of the boys starting being inappropriate with their tackling. Next thing I knew, I was in the office with the rest of the boys. The young lady had run to the principal saying she had been attacked. I knew that I hadn’t touched the girl, but who was going to believe me?

I was known for stretching the truth, especially if there were consequences to pay. Thankfully, I had parents who knew me and my mom started digging until she got to the bottom of the matter. But that day, something changed for me. I still had more growing to do in the area of my “yes being yes,” but I realized people will judge you by the standard you set. The you they know comes from the seeds you sow!

If Christ is the Lord of your life, you have His nature of truthfulness living on the inside of you. But because you live in a world that thrives on lies, you have to cultivate a true heart by attending to true thoughts and actions. Feeding on God’s promises and precepts and His Word will establish a trustworthy foundation on the inside of you. If you are training up your children, this is an especially important area on which to work.

Embodying a lifestyle of the whole truth can only come by the help of God. Let our prayer today be one derived from hearts who love to be beacons of true light in the earth. For others to learn to trust God, they must be able to trust us!

Jesus answered, “I am the way and the truth and the life. No one comes to the Father except through me. John 14:6

Biblical Meditation: Psalm 15:1-3 LORD, who may dwell in your sanctuary? Who may live on your holy hill? He whose walk is blameless and who does what is righteous, who speaks the truth from his heart and has no slander on his tongue, who does his neighbor no wrong and casts no slur on his fellowman.